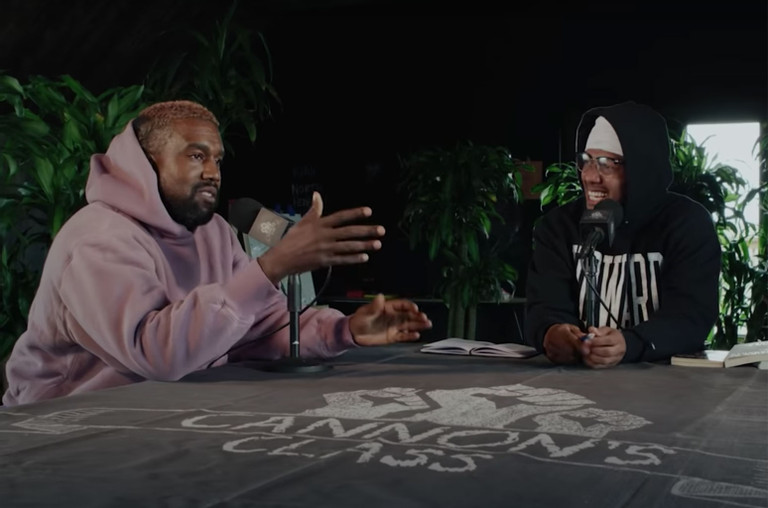 Kanye and Nick met up near his West's Wyoming ranch for part one of their wide-ranging discussion about politics, religion, fashion, money and family.

it #MightNotMeanNothinToYallBut Kanye seems calm cool collected and appears to be on his meds.

West on his 2016 hospitalization during Saint Pablo Tour

"The first time I was put into the hospital in 2016, I actually started reading the Bible. That was part of what God hit me with. And you know, God... has a calling on all of us, and He uses us in different ways. I'm not going to lie to you, I like being cool. I didn't go into an environment to come off uncool.

... When I went to the hospital the first time, one of the things I wrote down was 'start a church in Calabasas.' And we sang Jesus' name to the hills in the center of the city of Los Angels."

West on being left out of Forbes' 2019 billionaires list

"What [God] says is He says, 'None of that matters.' I went in from being snubbed by a magazine, but I was recognized by God.

...I got snubbed off the Forbes list for two years that they said I wasn't a billionaire. How you jump from a net worth of $240 million to $3.3 billion unless you been snubbed? And it felt like we not gonna allow people to know that someone that didn't follow our rules could actually make it. Then God gave increase."

"Virgil, when he went to Louis, that hurt me.... Because I was the Louis Vuitton Don. I know, I opened the door, but then I wanted to be the Louis Vuitton Don! ... And someone from Gap, I said, 'Man, it was always my dream.' And he was like, 'Louis Vuitton was your life dream?' And I was like, 'No, look how God is. Actually Gap was my dream.' Because I was working at Gap, getting fresh at the Gap, not being able to afford Abercrombie, and getting polos off of layaway at TJ Maxx and Marshalls before I even knew what Louis Vuitton was. Before I knew the idea. I never heard the word 'high fashion.' We was just getting fresh."

West on his 2019 Sunday Service Coachella

"When I did Coachella, we built this mountain. And then afterwards, we tried to do like this mountain in this park in our backyard. And Ray Romulus, who worked with us on Sunday Service, said, 'It sound like we just had a Coachella hangover or something.' And then we took it and we took the mountain and we shaped it this way. Do you know what happened with the sound? Have you ever put an iPhone in a cup? It amplifies. So actually for the fact that we got lower, our sound amplified. We are lower, the more humble you are."

West on the 2009 VMAs controversy with Taylor Swift

"If God didn't want me to run on stage and say, 'Beyoncé had the best video,' he wouldn't have sat me in the front row. I would've been sitting in the back. He wouldn't have made it the first award. And [He] wouldn't have made it so ridiculous of an idea 'cause I had never heard of this person before that night. And 'Single Ladies' is like one of the greatest videos of all time.... And I was only drinking Hennessy because I didn't want to go to the awards show 'cause it was a set-up!"